It’s a fond farewell for the Ingalls, in the ninth and final season of this unrivaled series, when they decide it’s time to leave their “little house.” Relish all 21 uncut episodes filled with exciting changes like when the Wilders take in their sweet niece Jenny; when Laura wins a book-writing contest; when a jealous Nancy runs away; and when Willie surprises the family with his engagement. Restored and remastered for superior picture and sound, savor every final moment of the much-loved series.

Little House on the Prairie:  Season Seven Deluxe Remastered Edition is coming to Blu-ray on December 26 and will be available exclusively from Amazon in a five disc set.  Many fans clamored for the Blu-ray releases to be continued and it looks like Lionsgate finally listened.

During season seven, Laura and Almanzo adjust to the ups and downs of married life and get a preview of what life with children is like when Almanzo’s nephews come for a visit.  Adam suffers a life changing accident in “To See The Light,” and Albert suffers heartbreak in the controversial “Sylvia” episode.  Meanwhile, Jonathan and Andy move to Sleepy Eye to start over after the tragic loss of Alice and this is the last season that you see Mary, Adam, Nellie, and Percival as regulars on the show. 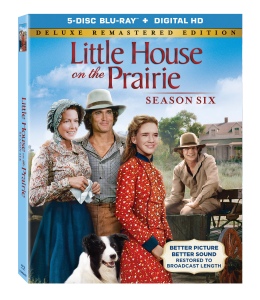 Join the Ingalls family as their lives change forever when the Little House on the Prairie – Season Five Deluxe Remastered Edition arrives for the first time on Blu-ray (plus Digital HD) and DVD (plus Digital) April 14 from Lionsgate Home Entertainment. The 5-disc set includes all 24 newly restored and remastered uncut broadcast-length episodes plus the new installment of the 40th anniversary-themed documentary, “The Little House Phenomenon – Part Five: Stories To Remember.” In the fifth season of the beloved series there are significant changes as Albert joins the Ingalls family and Mary realizes her independence. Little House On The Prairie – Season Five Deluxe Remastered Edition will be available on Blu-ray and DVD for the suggested retail price of $24.99 and $21.98, respectively. In addition, every episode from all nine seasons of Little House on the Prairie is currently available on Digital HD.

END_OF_DOCUMENT_TOKEN_TO_BE_REPLACED

Here are some more before and after screenshots from the HD restoration using scenes from The Lord is My Shepherd.

You can click on the following link for a better look. 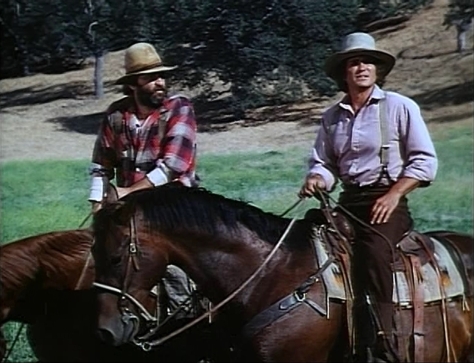 END_OF_DOCUMENT_TOKEN_TO_BE_REPLACED

The $39.99 deal has ended, but you can still buy all 9 seasons of Little House on the Prairie in HD for $69.99 from internet streaming provider Vudu.  If you purchase this, make sure you buy the HDX copy which will also give you access to the regular HD and SD versions.  Roku Players and many Blu-ray players and other streaming devices will allow you to watch Vudu content on an HDTV.

END_OF_DOCUMENT_TOKEN_TO_BE_REPLACED

SANTA MONICA, CA (August 26, 2014) – In September 1974, the first season of Little House on the Prairie premiered on NBC, bringing Americans together to share in the lives of Charles, Laura and the entire Ingalls family. Now for the first time, 40 years later, every episode of Little House on the Prairie will be available on Digital HD September 9th from Lionsgate Home Entertainment. Meticulously restored to original broadcast length and remastered for optimal picture and sound quality, all nine seasons will be available in high definition for fans both new and old to experience the timeless themes of love, adventure and rich family values like never before.

“I am overjoyed that 40 years later, the series that I grew up performing on, is available for new generations to enjoy. Little House on the Prairie is a show full of love, community and heart,” said Melissa Gilbert (“Laura Ingalls Wilder”). “The stories are still relevant and have resonated for decades with audiences around the world. With the digital release of all nine seasons, the show now looks better than ever and the scenes that were cut for syndication are fully restored. So every episode can be seen as it was originally aired and intended.”

END_OF_DOCUMENT_TOKEN_TO_BE_REPLACED

Season 3 of Little House on the Prairie will be available on Blu-ray and DVD September 9.

You can order from Amazon at the links below.

Here are a couple of screenshots showing what Little House looked like before and after the restoration for the season one Blu-ray release.

All things involving the Little House on the Prairie TV series